All had seen the Prime Minister launch the Swachh Bharat Mission on the occasion of Gandhi Jayanti in 2014 with much fanfare and talk around it. All TV, radio channels and the media overwhelmingly covered the news and events marking the occasion by devoting prime time slots. One could see a diaspora of famous personalities from politics, cinema, entertainment, sports etc. adorning the littered streets of major Indian cities with long brooms in hand, sweeping away filth that ensconced happily all around. There is absolutely no doubt that the campaign is the outcome of very humble and noble intentions harbored by our prime minister who thought about the pressing need of launching such a campaign in the first place. No one has even an iota of doubt about its usefulness and need. The Father of the Nation, Mahatama Gandhi also supported the idea of cleanliness and kept his personal space as well as surroundings immaculately neat and tidy. When we visit the US or the Europe the first thing that strikes us is the cleanliness that greets you. 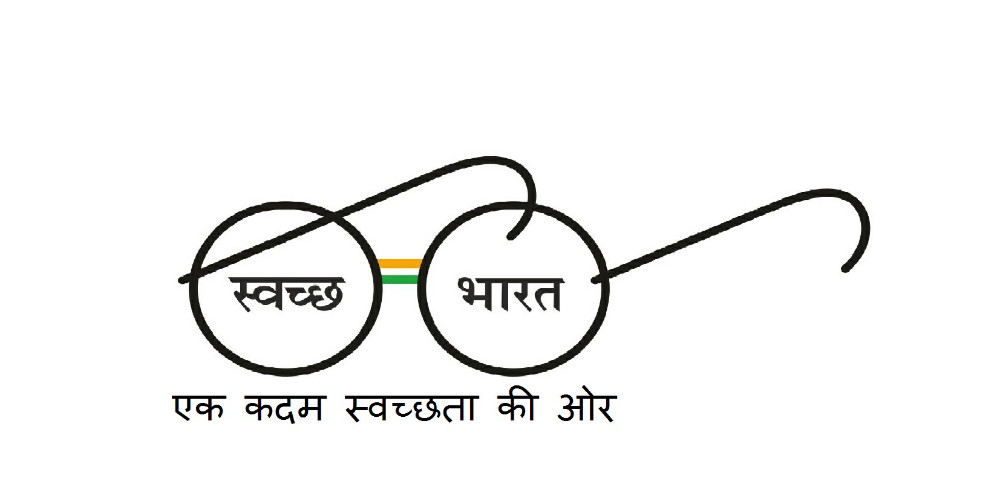 Don’t we admire the neatness with eyes wide open and gape at how clean the streets and the roads are? And simultaneously fret at how pathetic and deplorable the state of cleanliness is in every part of our country. Mr. Modi mentioned in his speech that the act of cleanliness was something that was very dear to the Mahatama and was even understood to being only next to God. The fact is that there was an urgent need to kick start such a campaign since all Indian cities whether big or small had been transformed into big garbage dumps and nothing much was being done to alleviate the situation in spite of all the collective efforts put before the launch of the ‘Swachh Bharat Mission’. We must applaud our prime minister who has recognized this as a major roadblock and brought the idea of cleanliness or ‘swachhta’ as well as that of ending ‘open defecation’ to the national discourse by sensitising the common citizens. The recent exercise of ranking our cities on a number of cleanliness parameters will bring this aspect into sharp focus and create enough awareness around it. A desired outcome of the ranking exercise is to inculcate good habits among the citizens and making the municipalities accomplish the goals set therein. Among the various dimensions involving a smart city, cleanliness is one important prerequisite. The idea is to turn present cities into smart cities by solving the problem of poor sanitation, non-operational waste collection & disposal system, lack of garbage-to-energy plants and sewage treatment plants (STPs). As a logical offshoot of the campaign, we would have to find a durable solution to a single dimensional problem of waste management – Reuse, Reduce and Recycle – less generation and scientific disposal. 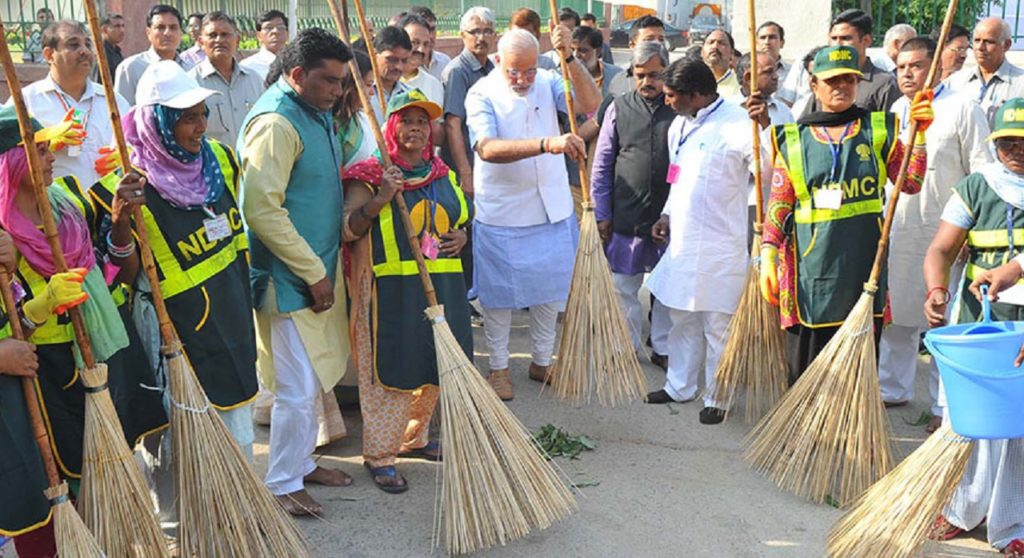 The talk about the mission will not be complete without understanding the psyche of the citizens when it comes to cleanliness. There seems to be a stark reality staring us in our face. The irony is that we the common citizens, including myself, are immensely hell bent on maintaining cleanliness inside our homes but when it comes to our streets and neighborhoods, we turn blind eye on the issue as if we don’t care or it does not bother us a wee bit. The case in hand brings to the fore, our double standards or hypocrisy in our behavior and attitude that has been deeply ingrained in our genes since immemorial past. Why should our streets become dirty again when they have been cleaned once? Why do we still continue to throw the litter on the streets? A TV channel went as far as to even rope in a very well-known film personality and devote the entire day with ultimate intent to sensitize common citizens about the issue and raise awareness levels in general. Talking of cleanliness and the Swachh Bharat Abhiyan reminds me of a popular TV series titled ‘Zara Sochiyae’ that used to be telecast on DD channel some 30 odd years ago. Through a crisp ten-minute documentary on various burning public issues of the day, the producer attempted to put some sense into the heads of the viewers. Since the last 30 years, that I remember, while some of you can vouch for even more, it’s a pity that the citizens have not learnt the lessons well and continue to undermine its importance and score poor grades in all surveys. It seems we do not pay any heed to good advice when it comes for free. 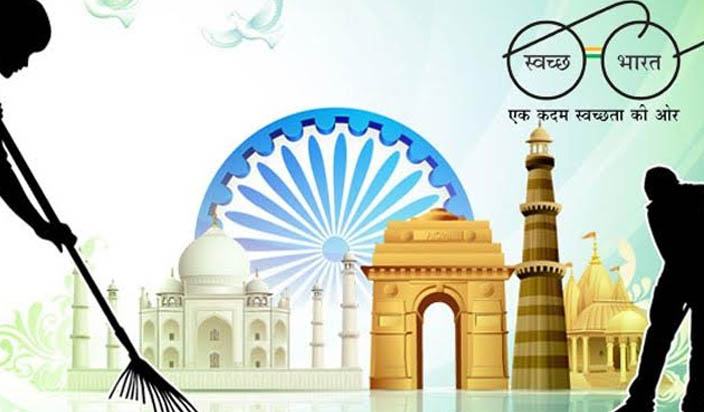 At first, even after much thought, the reasons for such poor showing completely escaped my mind. I confess, I was thoroughly at a loss for real reasons and also for words when it came to putting them on paper. I decided to take first hand experiences and observe the ground realities as they exist. My quiet deliberations and analysis of the situation yielded some fair results. The real question for us to answer is this. What is it that prevents me or anyone for that matter to take a groom in our hands and clean the outside of our homes, say a few square feet of area that comes under the municipal limits? Paucity of time could be one reason for not cleaning the area. But do you realise that it is a dubious and a trivial reason! Do we ourselves do it or there are people employed by the household who do? Can’t we ask them to do it? Since we are a deeply rooted casteist society thousands of years old and thought to be highly evolved, we view picking litter as a perfectly demeaning thing to do as if it was much below our dignity and damn right insulting. We consider it to be the job of a person from a lower caste who is also lowly paid and doing ‘his’ kind of job is damn ignominious for the ones belonging to the so called upper caste or ‘wealthy’ people. That is the reason why any amount of advertisements or news coverage on TV and radio channels will achieve limited success. 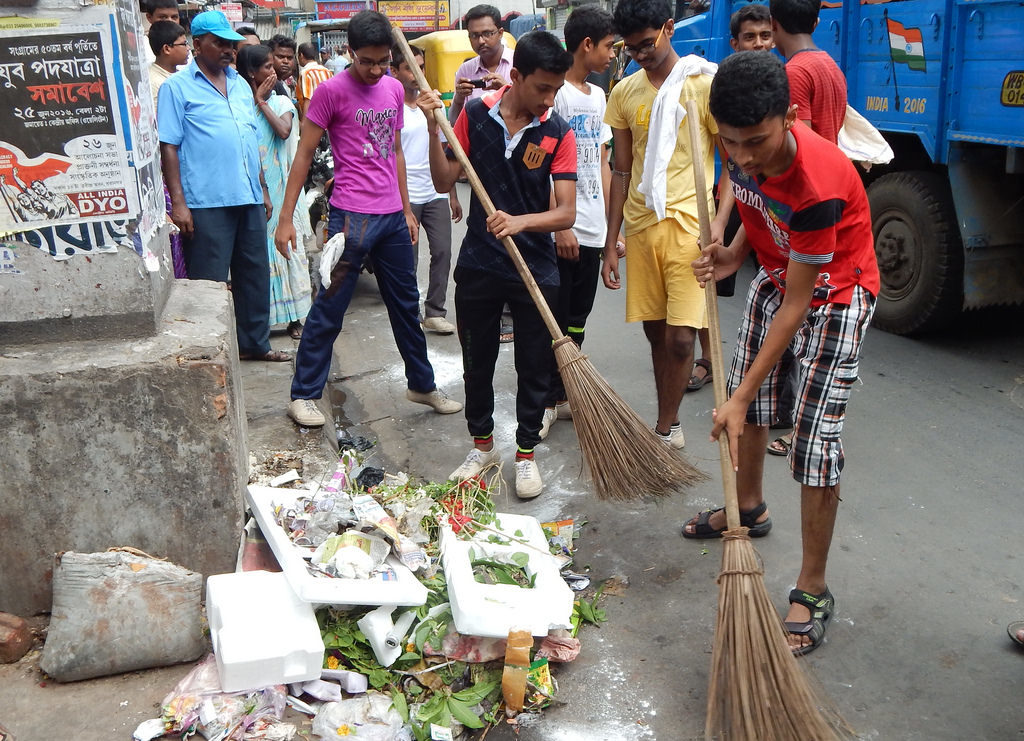 It is the duty of each one of us to keep our neighborhood clean. If the prime minister Modi can do it at a police station in New Delhi, I think we can all do it as well. Mr. Modi has shown us the way and to tread on the path is our responsibility. Believe me the broom is not all that heavy and the dirt not all that sticky! The need of the hour is a transformation in our thinking and attitude in the real sense that will bring about perceptible change in the way we approach the subject. No amount of cursory actions, let alone talks on the subject, can motivate us to keep our city clean. Think about it, the quality and quantity of success of the campaign is solely dependent on common citizens like you and me. We should make it a big campaign covering the entire country. Sparing a thought one more time, wasn’t it something we should have been doing all the while without the necessity of a third person telling us its need and importance on why cleanliness should be practiced? Have we not learnt in schools as young students, why it is important to maintain cleanliness in our homes and all around us? We all can vouch for its benefits and still we fail! Did we ever pause and realize the effect of our actions when we get on to the roads and the society compounds when we litter indiscriminately? Are we so apathetic towards issues concerning our own well-being? The cost of not practicing cleanliness is huge for both citizens as well the governments by way of extra resources committed by individuals and governments to fight disease and ill health, which is perfectly avoidable. The burden of disease is born by the poor a lot more that the well-to-do as the poor are exposed to the risk of contracting diseases in the event of an outbreak. The poor are ill prepared to handle and steer themselves away from the pernicious effects because of poor quality of life they lead. 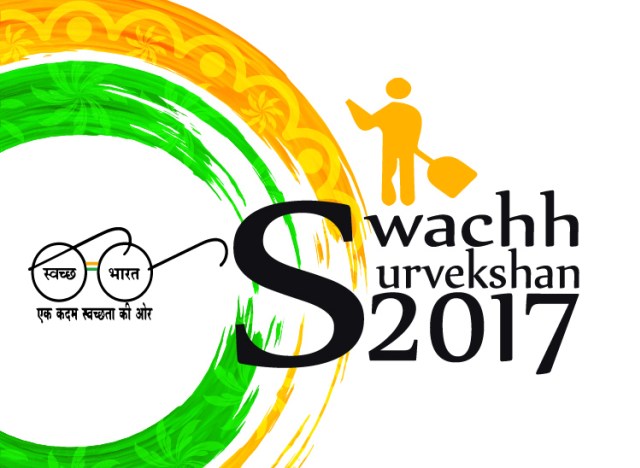 A right step in the desired direction is the launch of ‘Swachh Survekshan’ by the Ministry of Housing and Urban Affairs (MoHUA) in 2016. Initially only 73 cities were included in the survey which was later extended to 434 cities in the second such edition launched in 2017. The target for 2018 of 4041 cities seems ambitious but well-conceived and doable. The main objective of the survey is to inculcate awareness among the common citizens about the benefits of cleanliness and make them participate in keeping the cities clean.  Another objective of the survey is to create a spirit of healthy competition among the states, towns and cities to improve the living conditions of the citizens they serve. The important parameter in the whole process will be how well it is able to constructively connect and involve ordinary citizens in achieving its objectives. It may seem like a baby step today but has the potential of it becoming a nationwide movement.

Do we realize the hypocrisy in our actions when we teach our children the importance of practicing probity in public life and what constitutes acceptable behavior? Why is it that we as adults forget these very lessons as soon as our words leave our lips? Let us resolve to put an end to this menacing behavior of ours especially when we understand clearly the dividends the ‘swachhta abhiyaan’ can bring us and the nation as a whole. We all should join hands in making the city litter free and developing the nation that we are so proud of.

Tags:
Previous Article
You cannot change the beginning but you can surely achieve a brand-new end
Next Article
Nirbhaya’s Ordeal – Misplaced Trust